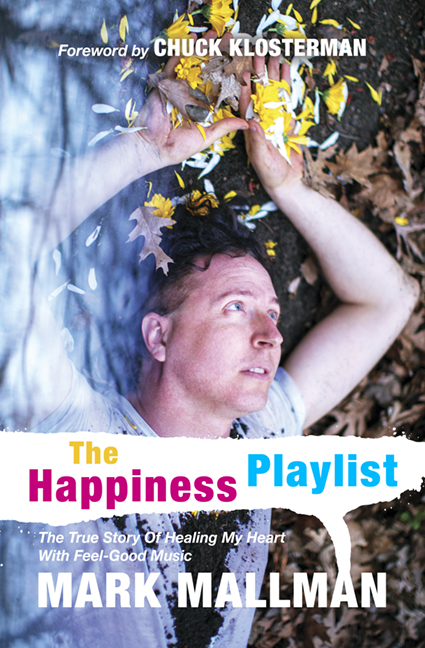 We agree with every word.

The Happiness Playlist is a memoir with the potential to inspire others to see music as a comfort, a companion, and a healing balm.

In The Happiness Playlist: The True Story of Healing My Heart with Feel-Good Music, musician Mark Mallman struggles with profound grief over the death of his mother. Early in the book, he writes, “It’s tiring, but grief opens up new ways of seeing.” Music does the same, and it is only through marrying them together that Mallman finds a way out of his own deep depression.

Mallman covers a year of grief and recovery, and of a strange addiction to sadness and anxiety. To help himself, he develops a happiness playlist. Savvy readers will have Alexa at the ready to augment the reading with the same songs that bring solace to Mallman. Keenly aware of the potential for music to influence moods and outlooks, Mallman turns away from some of the darker songs that he used to scream out and instead opts for Pharrell Williams’s “Happy” and Van Morrison’s “And It Stoned Me,” and the music runs the gamut from musicals to the Velvet Underground. Just as Mallman is grieving the loss of his mother, he is also transitioning from being his beloved Annie’s boyfriend into her friend—another loss where he sees and actively sows the potential for something new.

One great strength of the book is Mallman’s deep affection for and knowledge of Minneapolis and its music scene. Between worshipful conversations about Prince and gigs at places across the city, he paints an active picture of the place, its people, its restaurants and bars, and its niche shops and history. The scent of deep-fried tater tots nearly wafts off the page as Mallman meets with friends at neighborhood haunts. He relishes the names of specific streets and stores, imbuing the text with familiar names for residents of the city.

The prose is fueled by short, declarative sentences and a narrative willingness to be emotionally vulnerable. It is often funny and just as often bittersweet. Mallman spends months trying to understand his nightmares, his anxiety, and his desire to be well. Along for the trip is is father, an endearingly supportive parent who gifts his son a Crock-Pot and advises him to make good, cheap soup. The two knock along supporting and loving each other as part of their own recovery from grief. His other frequent companion is Annie, and their conversations are silly, strange, nonsensical, and intimate. Mallman has a particular gift for catching the quirks of their dialogues.

Speaking with conviction to the notion that music can heal, The Happiness Playlist is a memoir with the potential to inspire others to see music as a comfort, a companion, and a healing balm.